Blubberhouses Cricket Club was originally formed during the first half of the 19th
Century, between this time and the present day the Club has only occupied four cricket
grounds:

Towards the end of the 19th century the then occupant of Skaife Hall a Colonel
Galloway improved the ground and held an annual cricket festival, which brought a degree of fame
to the ground and to Blubberhouses, with national and international players taking part,
including the Hon.F.S.Jackson, B.J.T. Bosanquet (the father of the Googly) and George Ulyett.

The Galloway’s became great benefactors to the Cricket Club and eventually
allowed the Club to use the ground. Ownership later passed to the Leeds Corporation and thence to
Yorkshire Water, who are the present day land lords.

Our present ground, below the site of the old Skaife Hall, was improved by the
Galloway family and is believed to have been used around the 1880’s. Col. William Galloway who
as President of the club promoted a annual Cricket Festival with national and international
players taking part, including the Hon. F.S.Jackson who played for Yorkshire between 1890 &
1907, George Ulyett who played for Yorkshire between 1873 & 1893 and B.J.T.Bosanqet the
player responsible for the ‘Googly’.

1992 sparked a memorable year as it commemorated the opening of the new pavilion.
In 2006, the installation of electricity was completed.

The 2008 season saw a new kitchen with cooker installed into the pavilion.
In 2013, thanks to Club President Michael Clipston, the club acquired an electric scoreboard.

William Galloway was an engineer and ironfounder, famous for manufacturing
“Lancashire” and “Galloway” boilers which powered many of the cotton mills of Lancashire.
He lived in Stretford.

His father, also named William Galloway, was a Scot, who, with two other Scots,
established the Caledonia Foundry, Great Bridgewater Street, Manchester in 1817. They made water
wheels for mills, including the water-powered spinning mill at Douglas Green, Whit Lane,
Pendleton.

William, born in 1796 and his brother John (born 1804), were trained as engineers
and ironfounders. They initially worked with their father, but in 1830, began their own venture.
This was at the time of the world’s first passenger railway from Manchester to Liverpool. They
had a railway workshop for repairs and made the first railway locomotive in Manchester, named
“Manchester”. It had vertical cylinders and its wheels were wooden with iron tyres. It took
six, third-class carriages to Chat Moss, but on the way back it hit the points, bent a crank and
returned “wobbling”. They made four more locos including the “Caledonian” that had trials
in September and October 1832.

In 1835, William and John decided on another venture called Knot Mill Ironworks of
W & J Galloway. They made steam engines for mills, gas works equipment, screw jacks and other
machinery. In 1840 they started making the “Lancashire Boiler” (credited to Fairbairn) and
took out several patents relating to the improvement of boilers and other parts of steam engines.
Their first “Galloway” boiler was made in 1849 for Messrs J Leeming & Co, Adelphi,
Salford. Up to 1891, they made nearly nine thousand Galloway type boilers, including a 30 horse
power specimen for the Great Exhibition in 1851. They also designed and built the Levens Railway
Viaduct at Ulverston and Southport Pier.

In 1856, William’s son, John Galloway junior and John’s son, Charles John
Galloway entered the business as partners and the firm became known as W & J Galloway and
Sons. It prospered and diversified.

John junior’s son, William Johnson Galloway, (1867 – 1931), became a JP and was
Member of Parliament for South Manchester. He was also a Colonel in 42nd East Lancashire Division
Engineers and a Director of the Lancashire and Yorkshire Railway Company. 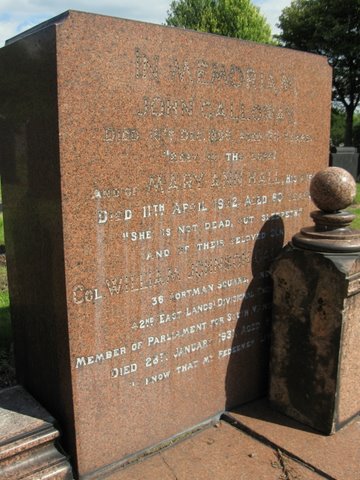 W.J.Galloway was a Director of the Manchester boilermaking firm W & J Galloway
Ltd and became MP for Manchester South West in 1895.

He was born in Sale, Cheshire in 1868, the son of John Galloway JP and the grandson
of William Galloway, the co-founder of W & J Galloway Ltd, the famous boiler-making company.
He was educated at Wellington College, Berkshire (which was created as a national monument to the
Duke of Wellington and boasts former pupils as George Orwell, James Hunt and Rory Bremner),
followed by Trinity Hall, Cambridge. He lived at The Cottage in Old Trafford, Manchester and
became a senior partner in the family business.

William was an active Conservative in Manchester and was selected for the seat of
Rugby in the 1892 General Election, but was defeated. However three years later he stood for
Manchester South West and was successful, joining Lord Salisbury’s Conservation Government. He
held the seat until 1906 when he was defeated by George Davy Kelley, Labour.

William J. Galloway was a Lieutenant in the Duke of Lancaster’s Own Yeomanry and
later became honorary Colonel of the East Lancashire Engineers, a unit of the Territorial Force.
During the First World War he was on the staff of the Quartermaster General and also held
positions with the Ministry of Information and the Foreign Office.

His business interests were numerous. He was chairman of the Claremont Park
Building Company, Blackpool and director of the Carnforth Iron and Haematite Works and the
Hoyland Silkstone Coal Company. In 1903 he was elected a Director of the Great Eastern Railway
Company, becoming chairman of the Locomotive Committee. When the GER was merged into the LNER, he
became a director and also chairman of the Steamships and Continental Committee.

William was a co-worker with his mother in a large mission and philanthropic work
in Hulme, Manchester. He was also a member of the Board of Hulme Dispensary. He travelled around
the world visiting many countries and in 1899 wrote the book Advance Australia – a short account
of Australia on the eve of Federation. He died of 28th January 1931 and is buried in the Galloway
family grave at Weaste Cemetery.